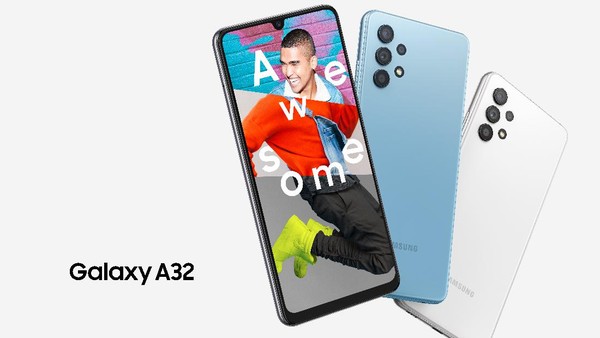 Technology-Portfolio.Net - Samsung is reportedly preparing a successor to the Galaxy A22 . A number of improvements will be given to this phone called the Galaxy A23 , one of which is a 50 MP camera.

When released last year, the Galaxy A22 used a 48 MP camera equipped with OIS. While the Galaxy A23 will use a 50 MP camera with a sensor from SK Hynix.

This is the first time for the South Korean semiconductor component company to supply a 50 MP sensor. Previously SK Hynix supplied sensors ranging from 10 MP to 20 MP resolution.

Back to the Galaxy A23, later the 50 MP sensor will also be equipped with OIS. In addition there are three other cameras mounted on the back.

According to information circulating, the Galaxy A23 will be launched in the first quarter of 2022, possibly around February or March. This phone is said to be debuting in India and will most likely be released in Indonesia. We'll just have to wait for it to appear in the country.

The Galaxy A22 5G itself will be launched in Indonesia in June 2021. This phone carries a 6.6-inch LCD screen with Full HD + resolution. Although it still adopts the Infinity U Display notch, this HP screen already supports a 90Hz refresh rate.

Embedded three cameras on the front. The composition consists of a 48 MP main camera coupled with a 5 MP ultra-wide lens, and a 2 MP depth. For selfie needs, an 8 MP camera is provided.

Samsung capitalizes it with the MediaTek Dimensity 700 chipset. There are three RAM options provided, namely 4 GB, 6 GB and 8 GB. While the internal memory is available in a choice of 64 GB and 128 GB, both are equipped with a microSD slot to increase storage capacity up to 1 TB.

A 5,000 mAh battery is built in with support for 15W fast charging. For security, there is a fingerprint sensor that is integrated with the power button, and in order to maximize the sound to the ear, the Dolby Atmos feature is provided. 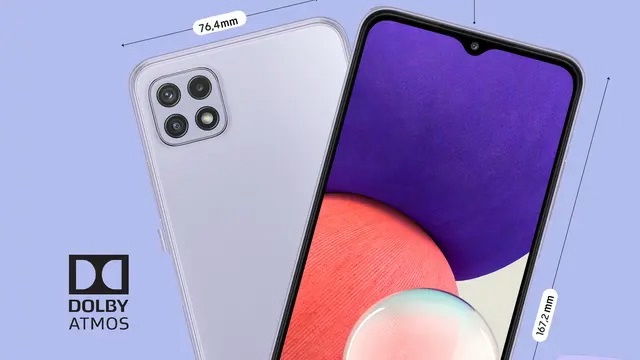 Galaxy A22, 5G Smartphone From Samsung

Technology-Portfolio.Net - Samsung has brought its affordable 5G smartphone, the Galaxy A22 5G.

The Galaxy A22 5G comes with a 6.6-inch FHD+ screen with a 90Hz refresh rate. Its performance is supported by the Dimensity 700 chipset, a 5,000mAh battery with 15W fast charging support, and three cameras, one of which is 48MP.

Armed with a MediaTek Dimensity 700 processor and a 5,000mAh battery, the Galaxy A22 5G can be relied upon as a daily driver for the digital native generation, especially with 5G network support.

The Galaxy A22 5G is also equipped with various additional features such as Live AR Sticker, Stamp, and custom filters to make Instagram Story or TikTok content even more fun. 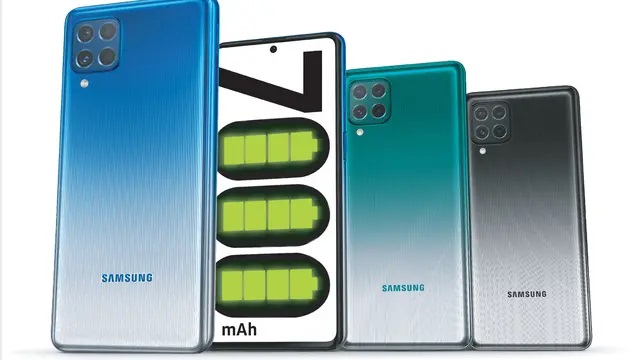 Technology-Portfolio.Net - Samsung introduced the Galaxy M62. The device comes with a 7000mAh battery.

With the support of a Super AMOLED screen, Samsung promises an experience to enjoy content that spoils the eyes of users.

Not only a large capacity battery, the Galaxy M62 is also supported by 25W fast charging. The Galaxy M62's 7000mAh battery capacity itself is claimed to support 33 hours of non-stop streaming, up to 24 hours of video calls, and 19 hours of gaming.

Galaxy M62 can also be used to charge other devices thanks to the Wired Power Share and C-to-C cable features in the package.

Another feature that is also a mainstay is a 64MP quad camera. Each of the Galaxy M62 cameras includes a 64MP main lens, 12MP ultra-wide camera, 5MP depth, and 5MP macro to create content and capture every precious moment.

The Galaxy M62 camera is also equipped with the Single Take feature which allows users to take multiple pictures and videos with various automatic effects.

For selfie cameras, the Galaxy M62 is supported by a 32MP lens and video recording up to 4K quality at 30 fps. 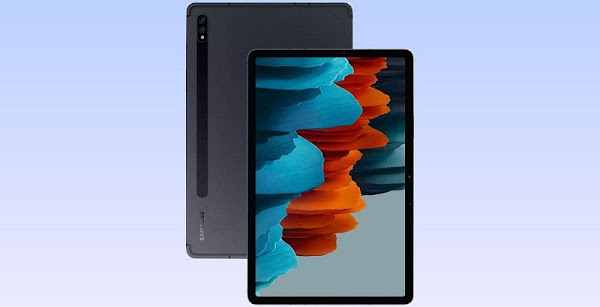 Technology-Portfolio.Net - The Samsung Galaxy Tab S7 Lite appears on the 3C certification page and reveals the device will have 44W charging capability.

Samsung is known to be launching two new tablets from a different series this year. One of them is the Galaxy Tab S7 Lite. Reportedly, the tablet will launch with the name Galaxy Tab S7 + Lite. This model recently appeared on the 3C certification website and revealed the capabilities of its charger.

The Samsung Galaxy Tab S7 Lite will support 44W charging. However, you need to buy a charger separately if you want to experience this maximum power output. Because, even though it's still equipped with an adapter - unlike the latest flagship smartphone, Samsung only provides a 15W adapter in the purchase box.

The 5G model as the most advanced among the other two models is expected to carry an adapter with a larger voltage. While other reports suggest the 5G model's rendering will come with a dual camera setup on the back. This is fairly new, because usually Samsung tablets only have a single camera. Both cameras will most likely have depth sensors.

The render also reveals a selfie camera on the right bezel, a USB Type-C port at the bottom, along with the speaker. At Geekbench, this 5G variant appears with a Qualcomm Snapdragon 750G SoC combined with 4GB RAM. The internal storage is probably at least 64GB. The 5G variant is believed to be the mainstay option among the three variants that the Galaxy Tab S7 Lite will have. To note, the three variants include WiFi connectivity only ((M-T730), 4G variant (SM-T735), and a 5G option (SM-T736B / SM-T736N). 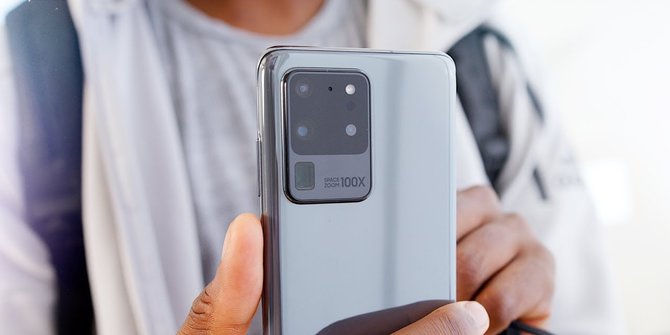 
Technology-Portfolio.net - Samsung has just patented a technology that features a configuration of six camera lenses.

Not only that, each camera lens sensor that is believed to be embedded in the Samsung Galaxy S30, can move and tilt separately.

This capability is based on a patent entitled "Apparatus and methods for operating multiple cameras for digital photography".

Based on the rendering design made by LetsGoDigital, there are five wide-angle lenses and one telephoto paired with an LED flash.

But it is not the number of Galaxy S30 lenses that are of concern, but the ability of the mobile camera sensor to move / tilt.

Can Focus in Different Directions

This means that each camera on the Galaxy S30 can look in a different direction from the others, or where the user directs the focus of his smartphone.

Not only that, the camera capability on the Galaxy S30 is also predicted to have a number of improvements in various ways compared to the Galaxy S series that are already on the market today.

Some believe, the lens of the Galaxy S30 camera will have a higher focal length, the ability to take low light photos better, HDR is more enhanced, and the ability to add bokeh effects to panoramic photos. 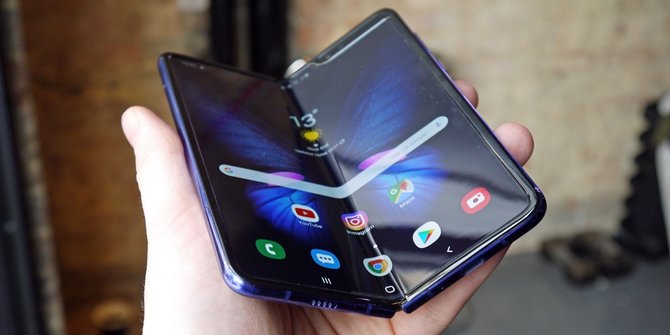 Rumors of Samsung Galaxy Fold Lite Will Be Released Next Year


Technology-Portfolio.net - After last year becoming a pioneer with the release of the Galaxy Fold smartphone followed by the Galaxy Z Flip, Samsung is ready to release another folding device.

Samsung has prepared a folding device, but that is just the 5G variant of the Galaxy Z Flip, and most likely the Galaxy Fold 2.

Previously, Samsung was expected to release the Galaxy Fold Lite version, but this will be saved for next year. This is because Samsung already has the smartphone option 'Lite', the Galaxy S20 Fan Edition which will be released together with Note 20.

The good news, the price of Fold Lite might be priced cheaper because of the flagship-style specifications 1.5 years before, as well as R&D costs that don't need to be budgeted.

Samsung itself must only have one smartphone option "Lite" or affordable. This is because the type of smartphone Lite relies heavily on the number of purchases. So, Samsung should focus on just one Lite smartphone.

However, Samsung is said to have mass-produced Galaxy Fold 2 smartphones, a premium variant of Galaxy Fold. This was revealed by a South Korean media publication.

The successor to the Galaxy Fold smartphone is expected to launch on the market in August 2020. The first information on the smartphone's specifications will probably be announced as soon as next month.

Galaxy Fold 2 is believed to be using the same Ultra Thin Glass (UTG) screen as used in the Galaxy Z Flip.

Different from the previous Fold series, Samsung's second generation folding screen smartphone will be priced cheaper though it is said to be carrying a 120Hz screen.