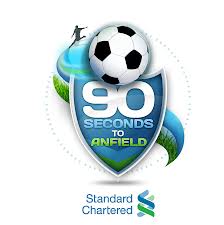 Ebuzzing Sponsored Articles - You pick the high spirit in World Football? and you want to kick a penalty in front of the KOP The Anfield Stadium and would like to increase knowledge about the legend of football and Liverpool player?.


It is very easy, Standard Chartered held a competition with prizes of a trip to Anfield, FREE!! You just need to make a video with a maximum duration of 90 seconds. Videos you create have the theme of your spirit to win in playing football.

Video Four winners will be entitled to a prize a trip to Anfield that all costs are covered by Standard Chartered. In addition, the winners also had the opportunity to be trained by Liverpool legend and see Liverpool players train at Melwood.

Selection of winners is based on Four Videos majority vote and Assessment of Independent judges including Reds skipper, Steven Gerard.

Standard Chartered also provide weekly Buy a ball signed by the squad and the Liverpool shirt signed by Steven Gerrard, the prize is awarded to the lucky giver vote in this competition.