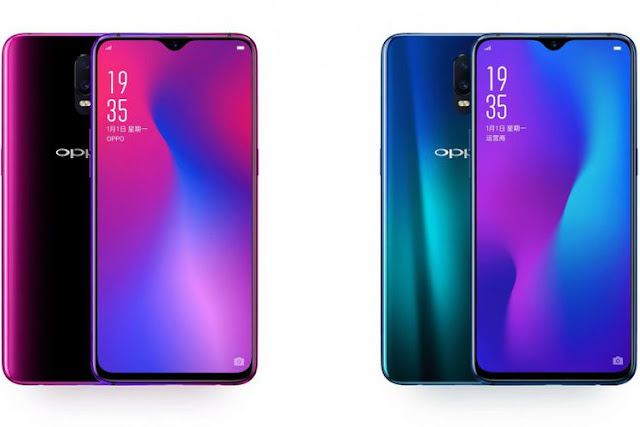 TECHNOLOGY-PORTFOLIO.NET - In the past few days, the leak around the Oppo F9 circulated a lot on the internet. However, Oppo actually gave another surprise to Oppo Fans.

The official Oppo website released the new successor to the Oppo R15 namely the Oppo R17.

The design is completely different from its predecessor, the most obvious is the face of the device. Bangs or notches that were once perched on top of the R15 display are now trimmed to pieces in the middle.

The "Notch" is similar to the one that Oppo F9 carries out that will soon be introduced. The Oppo R17 also features an in-display fingerprint or a fingerprint scanner on the screen.

The screen surface is also coated with Gorilla Glass 6, which will protect the smartphone that falls from a height of one meter in 15 consecutive times.

At the top there is still a very thin frame as a speaker holder. The Oppo R17's screen span reaches 6.4 inches AMOLED paneled and full HD Plus resolution. The aspect ratio is called to reach 91.5 percent.

At the bottom of the screen is a fingerprint scanner on the screen. The sensor measures 4 square millimeters and has a 3P Micro Lens for reading fingerprints optically.

Shifting to the camera sector, the Oppo R17 is equipped with a dual camera arranged vertically on the rear. Each resolution is 16 megapixels and 5 megapixels f / 2.0 aperture.

The front camera that is based on the notch has a 25 megapixel resolution.

The Oppo R17 is powered by Snapdragon 670, a new 10nm process technology chip that has eight Kryo 360 cores, Adreno 615 graphics and 1.7 GHz efficiency. This smartphone will run with the Android 8.1 Oreo operating system (OS) coated with the Color OS 5.2 interface.

This device is also supported by the fast charging technology made by Oppo namely VOOC to charge a battery with a capacity of 3,500 mAh. Oppo R17 will be available in two colors, namely Blue Stream and Neon Purple.

The color design on the back has a gradation pattern, similar to the one in the Oppo Find X.

The color will change with the point of view. Blue streams for example will show blue, green and aqua.

While Neon Purple will change color from magenta to purple on the edge and black in the middle. The Oppo R17 will be sold flash sale in China in August 2018 where the official price will be announced on the same day