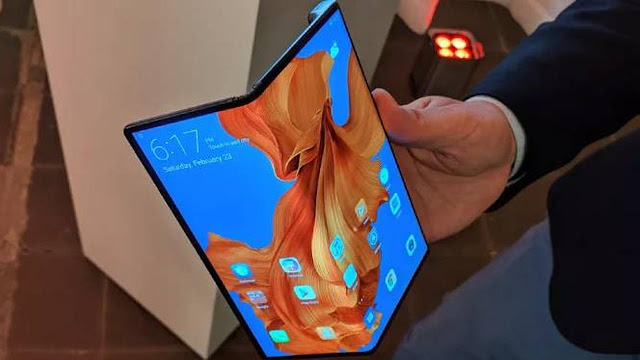 Technology-Portfolio.Net - Huawei has just introduced its first folding screen smartphone, the Mate X, on February 24, 2019, one day before the 2019 Mobile World Congress (MWC) was held in Barcelona, Spain.

Because it carries the concept of a folding screen, this smartphone has a screen that can be folded as thin as 11mm, with a screen size that can be flexibly changed to various shapes from 8-inches, 6.6-inches (front panel), to 6.38-inches (rear panel ).

Mate X is also claimed to be the only smartphone designed for various phases of future commercial 5G development.

This smartphone also marks an important milestone for Huawei, which became the first vendor in the world to build a comprehensive 5G ecosystem, including network infrastructure, CPE, chipsets and devices.

For your information, in fact a little public who noticed two days before the launch of Mate X, Vodafone Spain and Huawei, made the first 5G standard call in the world in Barcelona, using new non-standalone 3GPP 5G radio standards and sub-6 GHz spectrum.

According to Peter Meissner, CEO and board member of the NGMN Alliance, the 5G telephone call sent a signal that the world was ready to introduce 5G commercial services.

In addition to its folding screen, Mate X is supported by 8GB of RAM and 512GB of internal memory, SuperCharge 55W technology, and a 4.500mAh battery. The EMUI software offers performance equivalent to the Huawei Mate 20 Pro.