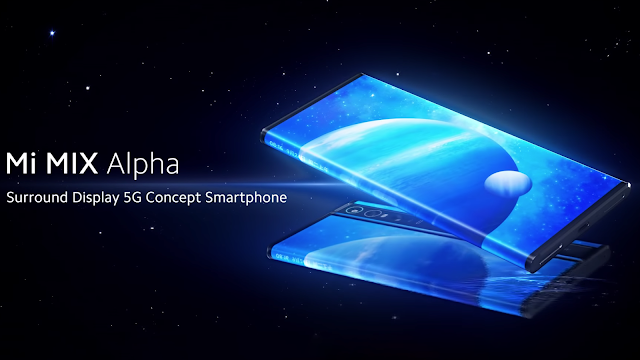 Technology-Portfolio.Net - Xiaomi, a Chinese technology company, recently introduced its newest mobile phone, the Mi Mix Alpha. This phone has a different design from other Xiaomi phones.

Mi Mix Alpha uses the "Surround Screen" body, which is where the glass wraps around the back of the phone. The part that is equipped with glass is only one side of the line, used to place three cameras on it.

Xiaomi revealed that Mi Mix Alpha has a screen-to-body ratio of 180.6 percent. Mi Mix Alpha phone is equipped with aero-grade titanium which makes the phone lighter.

Not only that, this phone is also equipped with a main camera sensor that is 108 Megapixel. With this sensor, users are able to take photos with a resolution of 12,032 x 9,024 pixels.

Then, there is also a 20 Megapixel wide angle lens and 12 Megapixel telepoto with 2x optical zoom and dual PD focus. Because it has an almost full glass screen or super AMOLED, the camera is not equipped with a front camera. The rear camera can be used for selfies.

This phone is also not equipped with a physical button, in addition to the power button on the top of the phone. Other components are hidden at the bottom of the phone's screen, including a fingerprint reader and acoustic technology that replaces the earpiece and the typical speaker. Like its predecessor, Mi Mix Alpha also uses ultrasound for sensing distances.

Currently the Mi Mix Alpha cellphone is still a prototype. But the Xiaomi claims if this phone is already in "small scale production" and will be launched in December.

Unfortunately it is still unknown whether the phone will be available outside of China.