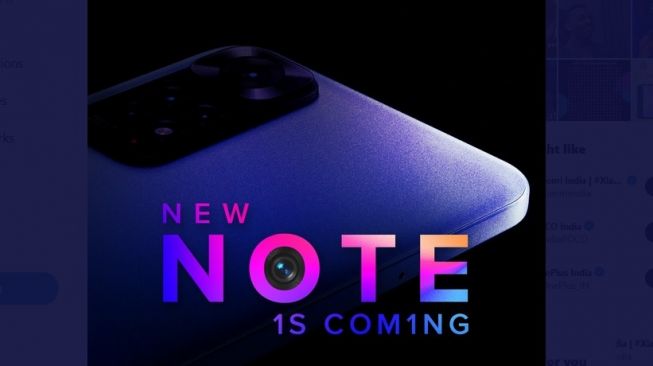 Technology-Portfolio.Net - After a lot of rumors, the Redmi Note 11S is finally confirmed to be launching in the near future. This was known after the official Xiaomi India Twitter account uploaded a poster of the phone this week.

The poster shows a photo of the back of a new cellphone, complete with the words, "Redmi" and "New Note 1s Com1ng". The poster was uploaded on Twitter on Thursday (13/1/2022).

Unfortunately, there is no further information from Xiaomi or its representatives in India about the launch time or specifications of the Redmi Note 11S.

But from the uploaded poster, it is known that the Redmi Note 11S will have four rear cameras. According to rumors, the main camera of this phone will be as strong as 108 MP. While the other cameras will have 8 MP and 2 MP resolutions, with macro functions.

This phone is certified in NBTC (Thailand), BIS (India) and Eurasian Economic Area (EEC). As per a report from GSMArena, the Redmi Note 11s appeared on the official website carrying the device model number 2201117SG.

Another rumor says that the Redmi Note 11 will be available in three variants, based on the amount of RAM and internal memory or ROM. The three are 6GB/64GB, then 6GB/128GB and finally 8GB/128GB.

This phone will be equipped with MIUI 13 operating system.

Meanwhile, as the main kitchen, the Redmi Note 11S is thought to be powered by a Mediatek processor. Rumors about this processor are still very vague, some say Helio G95, but others suspect Dimensity 810 - the same as on the Redmi Note 11 which will launch in October 2021 in China.

Speculations are circulating claiming that the Redmi Note 11S could have an AMOLED display with a refresh rate of 90 Hz. These are still just leaks and predictions so we need to wait for the teaser regarding the Redmi Note 11s.