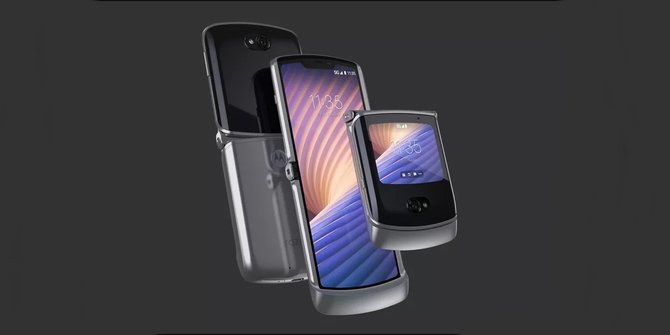 
Technology-Portfolio.net - Earlier this year the legendary Motorola smartphone vendor released its folding smartphone, Razr. This is a rejuvenation of Motorola's iconic line of flip phones.

The main problems with this folding smartphone are quite a lot, starting from the squeaky hinge, the camera that is not very good, and the small battery size.

But in the end, Motorola revealed the second generation of this foldable smartphone, and gave several updates to fix a series of flaws in the first generation Razr.

In this latest Motorola Razr, there is 5G connectivity, a better camera, and also very useful software.

By design, there is not much difference between the old and new Razr. This is because many changes are occurring inside. Starting from the Snapdragon 765G processor combined with 8GB RAM and 256GB storage. With this processor, this smartphone is capable of sub-6GHz 5G connections.

In addition, what has changed is the battery, which this time has a capacity of 2,800mAh.

Another change in hardware is the fingerprint scanner that has been moved to the back of the smartphone. Previously, the fingerprint sensor was on the chin. Not only that, the shape of the camera was completely overhauled.

About the camera, Razr previously only had a 16MP camera and a 5MP selfie camera. This is certainly a very limited camera, with only good guarantees when shooting in the sun.

Well, this time the Razr provides an update with a 48MP main camera equipped with laser autofocus, and combined with a Time-of-Flight sensor, as well as optical stabilization.

In addition, the front camera is also 20MP, although this sensor is actually a 5MP sensor that applies pixel-binning technology.

Finally, it is about software whose functionality is extended to external screens. This makes the front screen when closed can be used for various features.

Motorola itself has not updated its hinge capabilities, so that deficiencies in the hinge system are still maintained.

Regarding the price, this latest Razr is pegged at a cheaper price, which is US$ 1,399 dollars