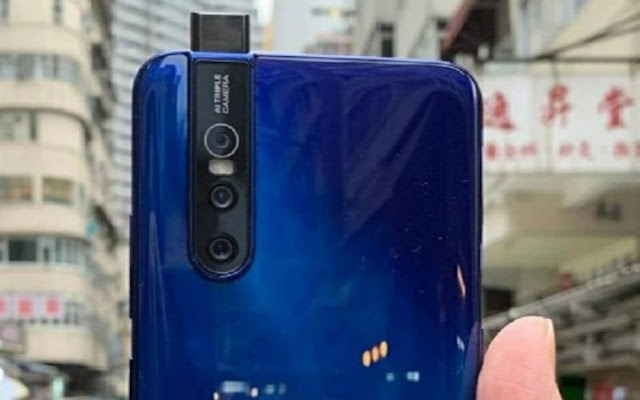 Technology-Portfolio.Net - Not secure anymore if Vivo will launch a new smartphone called Vivo V15 Pro. Reports and leaks about the smartphone have been widely circulated so far, even including the official teaser from the company. Vivo V15 Pro itself will be officially launched on the 20th of February.

This time, the latest leak appears in the form of a blue variant Vivo V15 Pro hands-on photo that shows the back of the smartphone. Seen, the back body of this smartphone looks smooth and there is also a selfie pop-up camera like an extended periscope and its position is parallel to the main camera setup. Use the pop-up selfie camera to get a higher screen-to-body ratio because you don't need to use a notch or bangs on the screen. Speaking of the main camera, this smartphone has a triple-cam setup that is arranged vertically.

In the previous leak, there was a black-red color gradient hue variant, and this showed that Vivo was more focused on aspen design for this smartphone. According to a previous leak, this smartphone will be powered by a Qualcomm Snapdragon 675 chipset with 6GB of RAM and 128GB of storage. In addition, there is a 6.4-inch wide screen with Full HD + AMOLED resolution, a 48MP main camera, and a 3,700mAh battery.