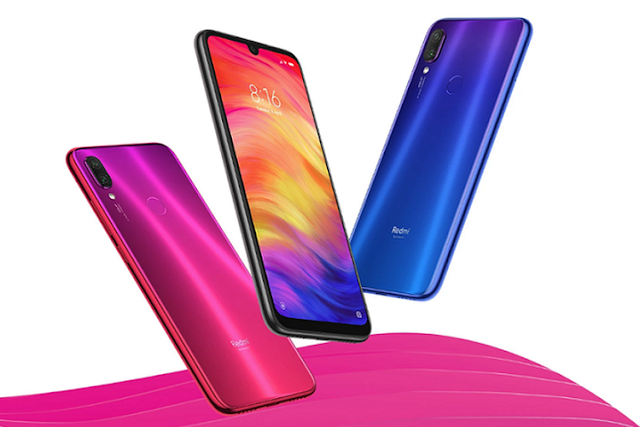 In terms of design, no significant changes appear. It's just that the plastic back of the Redmi Note 7 Pro is protected by Gorilla Glass 5, which is colored with gradient colors, just like today's smartphone trends.

Gorilla Glass 5 protects not only the back, but also the 6.3-inch LCD screen. The screen supports a resolution of 2380 x 1080 pixels.

In this Pro version, the Redmi Note 7 still uses teardrop notches or small notches protruding above the screen. Although the upper frame is trimmed quite a lot, but at the bottom or chin, the frame still looks quite thick.

Not much different from the regular version, the Redmi Note 7 Pro is also equipped with a dual camera with each resolution of 48 megapixels and 5 megapixels.

On the regular Redmi Note 7, the sector is supported by Samsung ISOCELL GM1.

On the densest front of a 13 megapixel single camera that is mounted on a notch. The camera is supported by AI Portrait mode and several other features, such as AI Beauty 4.9, and AI scene detection.

In addition to producing a selfie, this camera also has a sensor to support the face unlock feature.

The Redmi Note 7 Pro is driven by the latest middle class chipset, the Snapdragon 675. This sector is the most distinguished from the regular Note 7 with the use of the Snapdragon 660 SoC.

Storage memory can be expanded up to 256 GB with microSD. Behind the immersed shell of a 4,000 mAh capacity battery that has now been supported by the Qualcomm Quick Charge 4.0 fast charger.

There are three colors available, namely Neptune Blue, Red Nebula, and Space Black and two other colors that come with gradient patterns.