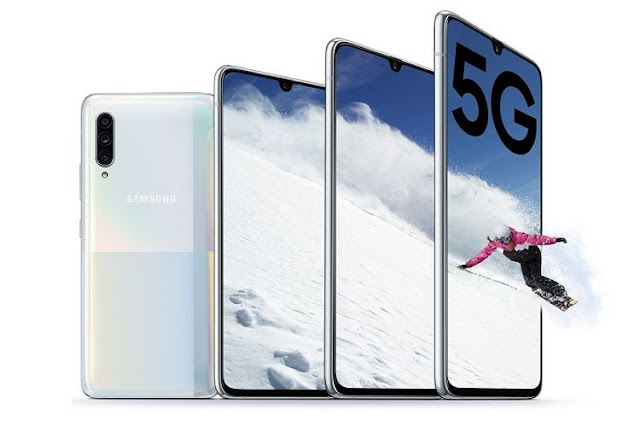 Technology-Portfolio.Net - Samsung has officially added a 5G cell phone with the launch of the Galaxy A90 5G. This phone is included in the upper middle segment, given the specifications that are similar to the Galaxy S10 line.

The hardware sector for example, the Galaxy A90 is driven by a Snapdragon 855 chip combined with a Snapdragon X50 5G modem. However, the screen design still uses Infinity-U with "U" shaped notch "similar to most types of Samsung phones.

With the Snapdragon 855 5G mobile platform, the Galaxy A90 5G offers a transformative mobile experience, from 5G connectivity to more sophisticated AI capabilities.

The Galaxy A90 is equipped with a 6.7-inch wide screen with Super AMOLED panel and full HD Plus resolution. In the screen embedded fingerprint scanner panel alias in fingerprint display.

In the upper corner of the screen is a single front camera with a 32 megapixel resolution (f / 2.0).

While the back of the Galaxy A90 is made of glass with a design called a "geometric pattern" by combining two colors that are slightly different at the top and bottom of the shell.

Some of Samsung's superior camera features like Super Steady, Scene Optimizer and Flaw Detector complete the rear camera features. While the front camera has a Live Focus mode.

Galaxy A90 is available in two variants of RAM memory namely 6 GB and 8 GB combined with 128 GB internal. Internal memory capacity can still be expanded up to 512 GB with the addition of microSD.

This device runs Android 9 Pie OS. Behind the shell is an embedded 4,500 mAh battery capacity that is supported by a fast charger with a 25W current and a USB C connector.

There are two colors to choose from namely black and white. Unfortunately, no information has been announced by Samsung. It is likely that this phone will only circulate in a number of countries, considering that 5G connectivity is not yet globally distributed.